Note: I am not a fan of editing because it takes me too long...I keep changing shit...until it's perfect..but it's never perfect..so i don't edit because i'd never finish anything......deal with it.


In the past 24 hours I've had a handful of people ask me the exact same question about my off-season squatting.


QUESTION:  HOW DO YOU TRAIN YOUR SQUAT IN THE OFF-SEASON?

ANSWER:  I BECOME A CATMAN


What I have been doing isn't necessarily because it's what I originally thought was the best thing to do in the off-season...it's more a result of being injured for the last 2 years and realizing that squatting above 85% all the fucking time has been wreaking havoc on my body.

I knew I needed to ease off of the weights a little bit but my ego had a hard time letting go and the hardest part with not lifting heavy is that YOU GET SCARED YOU WILL LOSE YOUR GAINS!!  THIS IS NOT THE CASE.


At RUM 5, I was injured but still competing even though I hadn't squatted or deadlifted for over a month going in.  I was questioning why I put my body through all of this heavy lifting...wondering if this addiction was healthy... anyway...Cutting weight in the sauna with Sam Byrd and Kade..and a guy who is awkwardly comfortable being naked trying to talk to us while he has a leg up and his balls are just hanging there...
We bonded...Squats.


Anyway, what Sam told me, other than that he is jealous of my beautiful mane, goes something like this (and I would also encourage you to read Squatting like you're the CEO.... off Chaos & Pain after this article.)


His reasoning can best be summed up here, courtesy of Chaos & Pain because it's easier to cut and paste than to think for myself or bother Sam while he's likely eating ice cream:
"I prefer this way because I like to do my rep max with about 80% and I like to feel it on my back a time or two before I have to max out my reps with it. Again, its a confidence thing. After all those weeks crushing weights confidence is pretty high. Ive performed hundreds of explosive powerful reps and not one single miss or grinder any where. By the time i get ready to max I'm ready to test the limits. Once I test, I reset my max and either begin again or change things up to add some variety- maybe a few weeks of chained singles the last 4 weeks before a meet."(Byrd)"

Okay, the purpose of writing this on my blog was so that I wouldn't have to answer people one at a time...it's getting too long...

Basically, I modified what Sam, or Dr. Squat, because anything up around 80% or more HURT.  So I had to stay light.

When I first tried this a year ago I was skeptical but I didn't have a choice...so I did it because I love squatting..period.  Once my injuries had healed up a bit I attempted a 1RM simply because I was lazy and didn't feel like getting the vicious back pump that doing 8 plus sets gives me.  I was able to perform a single with 715...at a time when my gym max was 720.  I BECAME A BELIEVER THAT THIS CONCEPT CAN HELP WITH MAINTENANCE OF A 1RM.

RECENTLY, AS IN LAST WEEKEND, I went for a heavy 1RM. Twice a week, I have been squatting with this 60% CAT modified style since RUM 6 last February... Only with 3 exceptions, I needed to take a photo for POWER magazine back in early May so I squatted 675(nice picture), I did a day where I squatted mixed but still with CAT principles(80%x3x2, 70%x4x4, 60%x5x2), and last Saturday...
Previous in the week I did 455x5x8sets on Tuesday AND Thursday.  I normally deadlift on Thursdays but I had strained one of my erectors the previous Thursday deadlifting 675 for sets of 5( PR sets!!)...so I squatted on Thursday to fill the void because I'm a crackhead when it comes to getting my iron fix..."the iron bug bit me"..but anyways..  IT'S SATURDAY AND MY LEGS ARE SORE FROM DOING 36000+LBS OF VOLUME SQUATTING...SO I LAZILY DECIDED TO SQUAT HEAVY...IF I DON'T DO WELL, I HAVE THE EXCUSE THAT I'M CAUTIOUS BECAUSE OF MY BACK, AND THAT I'VE ALREADY SQUATTED TWICE THIS WEEK...AND LOTS.

PUTTING AN END TO THIS NOVEL I SQUATTED 685 LIKE NOTHING, 705 FAIRLY WELL, AND ATTEMPTED AND FAILED 730 (oops caps lock off, I'm not retyping all that...  I only attempted 730 because i meant to try 720, did shitty math and accidentally put 725 on, didn't realize this until i did my belt up..so i grabbed 2.5's and threw them on the outside....shrugged my shoulders and thought, "Fuck it...go for a PR."     FAIL
...BUT  I AM NOW CURIOUS IF FOLLOWING THE ACTUAL PROTOCOL AND NOT MAXING OUT AFTER 36000 lbs of volume in the same week...WHAT KIND OF GAINS CAN BE MADE?!?!

I hope this helps.
Random points:

ENDING IT WITH A RAW SQUATS COMPILATION....and I yes, I used this particular compilation because I am in it...SO WHAT.

For those of you who've checked out my blog because you're a Chaos and Pain follower:
CAT SQUATS

Fuck..this took me over an hour and a half to write..and it was supposed to be saving me time. 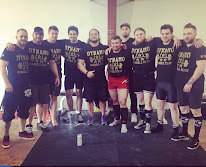 "YOU RISK TEARS IF YOU LET YOURSELF BE TAMED"